Okay, here’s my booty from the show…

One of my favorite San Diego dealers is Van Eaton Galleries. Friendly folks who always seem to have some animation art I want at a price I can afford.

Last year at Van Eaton, I bought a piece of Scrappy-related art that featured a little kid who looked like Harpo Marx. This year, I bought a more finished-looking version of the same pose, one that adds a harp and a name: Zadoc. I have no idea whether this character ever appeared in a cartoon. Do you? (Incidentally, the character design and pose are extremely Dick Huemeresque–if the drawing isn’t by him, it’s very much in his school)

And here’s a model sheet of a character who could only be a Terry-Toons character: a sexy harem girl mouse…

I’m not sure if this model sheet is from Aladdin’s Lamp, but it might be. (Didn’t Terry make hundreds of cartoons involving rodent harems?) Even if it’s not, it’s an excuse to embed that Mighty Mouse cartoon:

If I had had to pay for a hotel room at this year’s San Diego Comic Con, I probably wouldn’t have come–what few rooms I could find were so insanely pricey that it woulda been hard to justify. But I was able to cash in a wad of Starwood Points for free lodging at the U.S. Grant (the location of the very first San Diego Con, and a nice place), so I made the trek.

As usual, much of the start of my trip was devoted to me questioning the wisdom of having made it. I bought a four-day membership weeks ago and brought a “quick scan” barcode that was supposed to help me speed through registration, but when I arrived at the convention center on Friday morning–I decided to skip Thursday this year–the line of other preregistered attendees was astonishingly long, and didn’t appear to be moving. (Fortunately, my secret identity is that of a mild-mannered reporter for a great metropolitan magazine, which meant I could register onsite for a press pass–that took five minutes.)

The con organizers put a cap on memberships that resulted in the show selling out every day. But it didn’t seem to lead to a less crowded affair–fifteen minutes past the Futurama panel’s scheduled start time, the line to get in was so apparently endless that I gave up. On the other hand, I strolled into the Simpsons panel with no wait; last year, getting in was an ordeal. And if you stuck to the areas of the show floor that were actually devoted to comics–basically the periphery on both ends of the hall–the show was bustling, but bearable.

The crowding would seem to have something to do with Comic-Con’s complete refusal to limit its scope or differentiate between the important, the worthwhile, and the abysmal. It certainly isn’t following its mission, which reads as follows:

Comic-Con International is a nonprofit educational organization dedicated to creating awareness of, and appreciation for, comics and related popular art forms, primarily through the presentation of conventions and events that celebrate the historic and ongoing contribution of comics to art and culture.

I have nothing against Sarah Silverman, but I fail to see how her TV show is relevant to that mission. I don’t understand why there are booths hawking swords and hard drives, or why it makes sense for Playboy Playmates to be signing photos on the show floor. It rankles me that the con’s program book celebrates every comic, TV show, and movie it mentions as a hit, a masterwork, or both.

Given that ithe convention’s current incarnation is swarming with people whose interest in the artform seems suspect, how about passing some sort of very simple comics literacy tests as a requirement of admission? It doesn’t have to be anything tricky–say, if you can name either of Superman’s creators, you get in. And if you can’t, you don’t.

A Comic-Con that simply stuck to its mission might attract fewer people. But some of us might enjoy it more.

OK, enough griping. As usual, having fun at Comic-Con–and I did–is a matter of finding the 2 percent of stuff that’s of interest to you. A few highlights of my Comic-Con:

* Going to a panel about the explosion of reprints of classic comics, and chatting afterwards with Carolyn Kelly about the work of her father, Walt.

* Picking up a couple of pieces of vintage animation art at the Van Eaton booth–I’ll show them to you when I’m home and can do decent scans.

* Having dinner with my new PC World colleague Jason Brightman and his former coworkers from Harris Comics, publisher of Vampirella.

* The Jack Kirby panel moderated by Mark Evanier this morning.

Here are a few random musings about the con so far:

* I like to spend a lot of time attending panels, and I wouldn’t be surprised if the average age of the panelists at the ones I like to go to is north of 75.

* Forrest J. Ackerman and Jerry Robinson, who are part of the fabric of the con as far as I’m concerned, don’t seem to be in attendance, or at least I didn’t spot them as panelists in the program book. I hope they’re OK.

* The San Diego Convention Center has by far the worst food service of any major convention facility I go to on a regular basis–it’s dominated by cash-only carts with long lines selling Mrs. Fields cookies and pretzels, and as far as I know, there’s nothing in the building that you’d call a restaurant. New York’s Javits center and the convention centers in Las Vegas and L.A. all prove that you can do convention-center food right.

Finally, a few photos (I may whine about the craziness of the con, but I brought a camera and photographed some of it):

Here’s Ron Dante, at the con to sign copies of a new set of Filmation Archies cartoons–which makes sense, since he was the Archies’ lead singer. But to me, he’ll always be the one man who was all of the Cuff Links, the group that sang the definitive bubblegum rock song, “Tracy.” 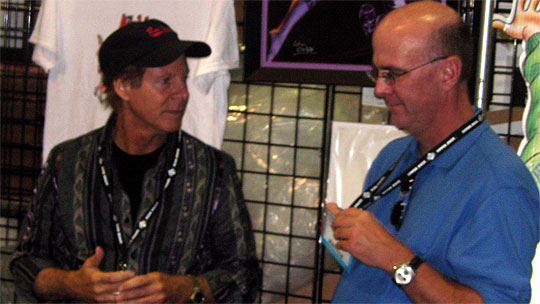 Lou Ferrigno, the Hulk himself, greets fans at the Mile High Comics booth. 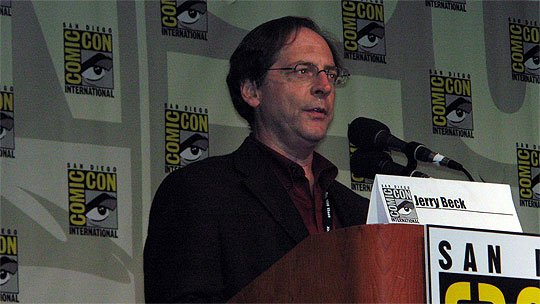 Popeye fan in hat given away to promote the upcoming box set. 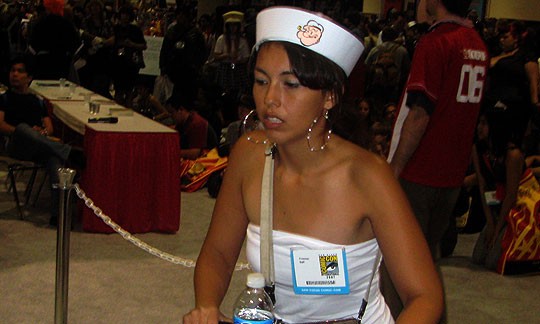 Original art from From Hare to Eternity, the worst cartoon Chuck Jones was ever associated with. 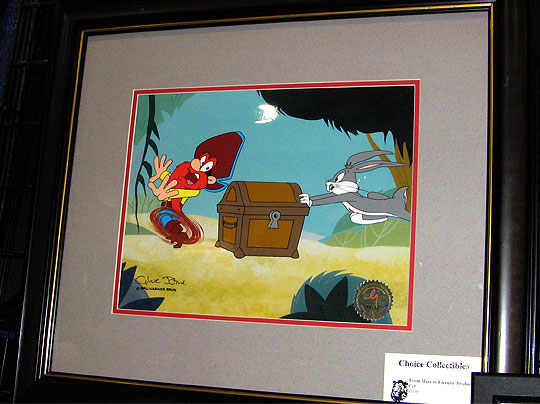 Catwoman relaxes by the trash. 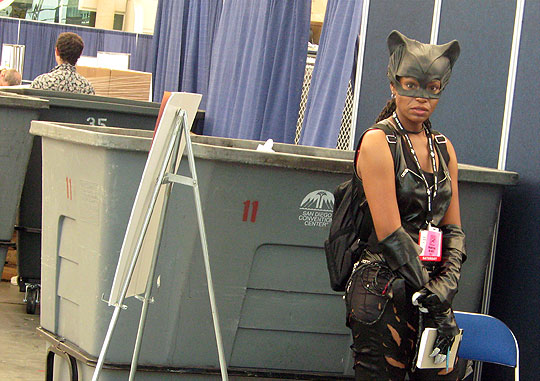 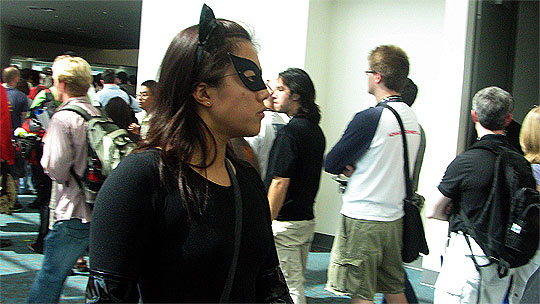 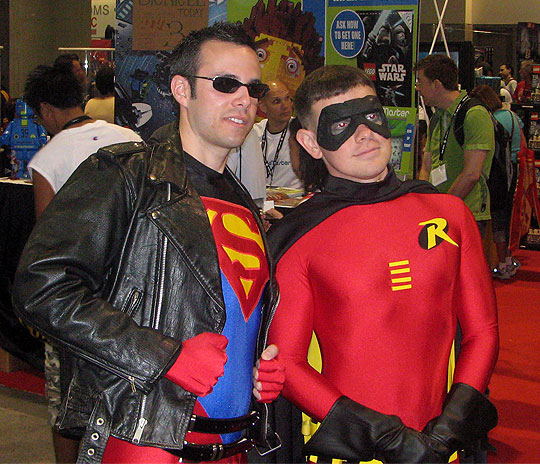 Another Robin and the Flash, or an approximation thereof. 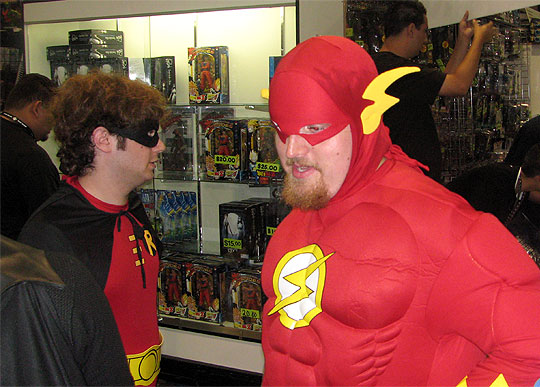 Yup, I’m at the San Diego Con. I’ll try to blog more about it tonight, but here’s a quick report on what I’ve found:

The fact that they put a cap on the number of admissions sold–if you don’t have a ticket already, you’re not getting into this thing–doesn’t mean that the show feels less crowded than last year. It just means that it only feels a little worse.

And at Jerry Beck’s Wost Cartoons screening last night, I saw something which I didn’t think existed: a cartoon that’s worse than Sam Singer’s Bucky and Pepito.

You probably all know about this already, but Burger King is sponsoring Simpsonize Me, a site that analyzes your portrait and turns you into a Groening character. If nothing else, it’s a lot better than their food. Here’s me:

I attended a dinner at a PC World retreat in Sausalito last week, and it was held in a room that had apparently been named by an Italian Mickey Mouse fan…

Isn’t the Internet amazing? A few years ago, I bought an offbeat Des Moines newspaper comic starring Charles Schulz’s Peanuts characters, illustrated by a cartoonist named Bob Davenport. Eventually, I scanned it and put it online. Then I heard from relatives of the artist who pointed me to more of his work.

And now I’ve heard from Paul Vandendael, who discovered some murals drawn by Sgt. Bob Davenport in a building in Reims, France in 1945–a building that was intended to be a hotel, but turned into an apartment building. Searching for information on Davenport, he found my site.

The murals are exuberant, earthy, at least somewhat offensive–and fun. And they’re in surprisingly good shape, although at least one looks to be either unfinished or missing part of itself.

Here they are–in the pre-Web days, what would the chances have been that any of us would have ever seen ’em?

Charlie Roberts, who knew George Ward, read my post on Walt Kelly’s assistant and sent along something nifty: the front and back of an envelope Ward mailed to him circa 1974:

I’d say that these drawings suggest that George Ward could draw Walt Kelly’s characters a lot better than most people who weren’t Walt Kelly…but not as well or better than Walt himself could. Thanks, Charlie!

If this shows up, I can blog from my phone, at least sorta…

Slate piece defends Disney “cheapquels” and says they’re sometimes better than the films that inspired them; as far as I can tell, it’s not satire…

I have a new cell phone with a decent camera, and I’m wearing it on a strap around my neck–which means that whenever I see somethng interesting, I can take a picture for posterity.

Mr. Magoo lives! He’s in the window of a clothing store (at a legendary corner: Haight-Ashbury), inexplicably but happily modeling a child’s dress:

If this building was here in 1920–and it looks like it probably was–it’s where Jay Ward’s family lived at the time of his birth:

(Side note: The building next door to this one houses, among other things, a Disney Store…)

You can contact me or read more about me.

Come visit me on Twitter, Facebook, Flipboard, and LinkedIn. Here are my Fast Company stories. And you can read my (sporadically updated) blog here.

I can hardly believe it, but I've been doing a (nearly) weekly chat since 1989. These days it's most Sundays at 6pm California time.